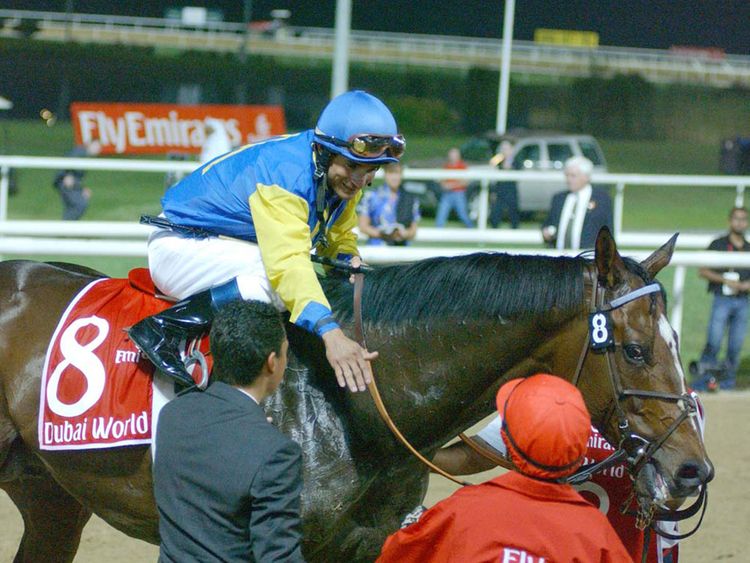 The brilliant Cigar and the perfectly pleasant Pleasantly Perfect are the only two horses who have excelled in the American sponsored Breeders' Cup Classic, then traveled half way around the world five months later to score in the richest Thoroughbred race in the world, the Dubai Classic in the World Cup race festival held in the UAE (United Arab Emirates).

Both prestigious races feature world competition for three-year-olds and up.

In 1995, Cigar was in his second year of invincibility and on his way to winning 16 consecutive races under the skillful hands of Hall of Fame jockey Jerry Bailey. Only one other horse before Cigar had won 16 straight contests. His name was Citation.

Cigar beat out the Breeders' Cup Classic competition in 1995 on a muddy track in the fastest time (1:59.58) ever recorded to that point. Five months later, in the spring of 1996, he went to Dubai and scored over Californian Soul of the Matter to win the inaugural World Cup Classic.

Pleasantly Perfect turned the same trick in 2003 and 2004, winning the Breeders' Cup Classic over rival Medaglia d'Oro, then turning back the same competitor in a stirring finish in the Dubai Classic.

America's Kentucky Derby winner in 1997, Silver Charm, finished second in that year's Breeders' Cup Classic, where Swain, an Irish-bred, placed third. In Dubai's 1998 Classic, Silver Charm claimed the title over Swain. Silver Charm returned to Dubai in 1999 to try to achieve back-to-back titles in the World Cup, a feat which would have assured him a place alone in American Thoroughbred history. His chief rival in the '99 Dubai field was Epsom Derby champion High-Rise. It marked the first time that a Kentucky Derby winner and an Epsom Derby victor squared off for a title.

In the way of the epic battle was a fellow named Almutawakel. A huge longshot, Al was a Godolphin Racing entry, and he came home with the bacon to even up the world scoreboard at two wins each for the USA and the UAE.

The Competition Heats Up

Dubai Millennium, son of the USA's Seeking the Gold, delivered for Godolphin in 2000.

In 2001, Captain Steve carried the red, white, and blue into the contest and was given favorite status. He had finished third in the previous fall's Breeders' Cup to the great Tiznow. In Dubai, he came in with his game face on, and the scoreboard was even up again at day's end — USA, 3; UAE, 3.

Ironically, the following year, Jerry Bailey rode Godolphin's Irish-bred Street Cry to the Classic title. Street Cry soundly beat his own favored stablemate, Sakhee. Either way, it was a win for Godolphin. The next year, Moon Ballad gave the UAE a 5-3 advantage.

Then came Pleasantly Perfect with his perfect stride to the wire in front by a half length. UAE, 5; USA, 4.

Electrocutionist regained the overall lead for Godolphin in 2006, but in 2007 a twist of fate evened the score again. Shadwell Stable, based in the USA, but owned by the brother of Godolphin Racing, fielded the nearly unbeatable Invasor. The Al Maktoum brothers brought the Thoroughbred world to a 6-6 tie as Invasor took center stage.

On March 29th, the tie will be broken. Will 2007 American Horse of the Year Curlin prevail? Or will Godolphin Racing beat him to the line?